If late night chatter has your bed-buddy awake at night, then this might be the first time you are becoming aware of your sleep-talking habits. But, sleep-talking can also be a symptom of more serious sleep disorders.

Understanding more about sleep-talking is the key to finding out if your slumber speech is normal or something to investigate further.

The technical term for mumbling, slurring, shouting, singing(?) during slumber is ‘somniloquy’. Sleep-talking comes in many forms, for nonsensical mumbles, to shouting profanities, and even Lady Macbeth style secret disclosure.

Some sleep-talkers seem to be having a conversation with someone not present, perhaps someone in their dream. While others can have frighteningly lucid conversations with a person who is present and awake.

While in medical technicalities sleep-talking is considered a part of the parasomnia disorders, much like sleep walking and night terrors. Wherein the disorder, in this case, somniloquy or sleep-talking, is an abnormal sleeping behaviour. Most medical professionals, however, do not consider sleep-talking to be of too much concern as far as negatively impacting a person’s health.

The presence of sleep-talking during REM, however, is potentially a sign of more severe parasomnia. Sleep-talking, particularly if it is reoccurring can be a feature of another sleep disorder such as; rapid eye movement behaviour disorder, night terrors, sleepwalking or sleep-related eating disorder.

Unfortunately, most sleep-talkers are blissfully unaware of their late-night chatter habits. Given that for the most part sleep-talking is not considered a cause for concern by most medical professionals, means that unless it is truly disrupting people in earshot trying to catch their Z’s, most people just end up sleeping with it.

Studies conducted in the United States found that approximately 50% of all children aged between 3 and 10 chatter in their sleep. With most out growing slumber slurring by adolescence.

Approximately 4-5% of those children will not be able to kick the habit as they grow into adulthood. With some studies suggesting that sleep-talking is hereditary.

Wherein, parents whom sleep-talk are more likely to have children who do so too. And vise-versa.

While it is easy to assume that a dream fuels many sleep-talking episodes, the fact that REM sleep is the most common stage of dreaming might point to other causes.

Foremost, if someone is consistently sleep-talking during their REM sleep stage then they may be suffering a ‘motor breakthrough’. Because of the nature of REM sleep, where bodies disable their motor functions, sleep-talking that occurs during this stage can be considered and REM disorder.

However, given that most sleep-talking occurs at any and many stages of sleep the cause is generally unknown. Some things considered to affect sleep-talking include:

Can You Make It Stop? 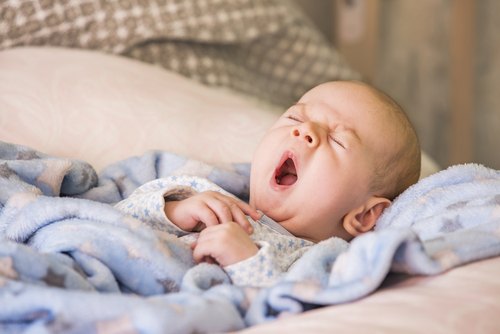 Given that sleep-talking has no one cause, it can be really tricky to treat. For the most part, there is not a ‘cure’ so to speak. However, if you are an adult and sleep-talking has come on suddenly, including screaming and intense fear you should consider seeing a doctor.

There is no test for sleep-talking, you may need to ask your parents and or roommates how long this has been occurring. You may have been a sleep-talking child and now it has returned.

If your sleep-talking appears to be in occurrence with another sleeping disorder than the doctor may ask you to undergo a sleep study.

Stress and lack of a good night’s sleep are contributors to sleep-talking so making an effort to reduce the former and gain more of the latter may help.

Another option is to start a sleep diary which may help to track any patterns which are arising.

Foremost, if sleep-talking is a concern for you or the person you are sharing a sleeping abode with than simply having a chat with your GP is a good place to start.

For a bed that makes sleeping a dream, contact Galligans Adelaide to find your perfect nights sleep.